The film tells the story of three days after the most devastating and largest in terms of victims earthquake that happened in Armenia on December 7, 1988. This day went down in history as the day of the greatest catastrophe, which claimed 25,000 human lives and left more than half a million people homeless. The main character of the film Gor goes to Armenia from Moscow to save his family stuck in the epicenter of the earthquake.

On June 10, the film rough cut was presented to the cinema community as part of the Kinotavr festival’s new business program “Works in Progress,” along with other films that are currently in production.

In March, the film “Spitak” by Alexander Kott was supported by the Eurimages Foundation along with new works by Laszlo Nemesh, Alice Rohrwacher, Terry Gilliam, Christian Petzold and other directors.

The film is going to be completed by the end of 2017. In 2018, Spitak will be attending the Film Festivals. Theatrical release of the film is timed to the 30th anniversary of the earthquake in Armenia - December 7, 2018. The premiere of the film will take place on the "Russia" TV channel. 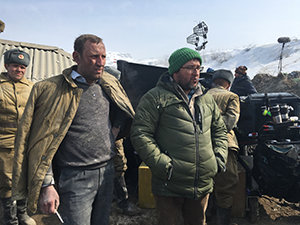