THE PREMIERE OF “THE PITCH”!

The Moscow premiere of Eduard Bordukov's film “The Pitch” took place on March 30.

Viewers were able to chat and take pictures with the director, producers and leading actors.

In addition, the “Caspiy” band performed a live concert at the event. Also, the Central Telegraph invited everyone to send telegrams signed by Spartak Moscow football club’s captain Artem Rebrov.

The entire crew and cast of the film presented the film on the stage. The creators of the film have thanked the guests for coming and expressed the hope that they would love the film, especially as these times films are rarely showing ordinary teenagers and their problems.

Mikhail Degtyar, producer: “The premiere of “The Pitch” made a big impression on me! I have not seen such an audience for a long time. It was something incredible - people laughed, cried and clapped during the film. It was clear that the ideas that we put into the film got into the very soul of these viewers, and in their hearts. I am happy that I contributed to such a film! I hope that “The Pitch” will be watched by tens of millions of viewers in our country, because such a film has not been made in Russia for a long time.”

The film will be released in Russian cinema theatres on April 7. 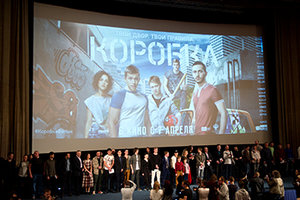